Thank you for the support your company provided us during Hurricane Harvey. Like many, we faced a number of challenges, but thanks in large part to your support, we were able to manage those challenges safely and effectively. We recognize your company faced many of these same challenges, both professional and personally, but your support was unwavering.- Executive VP, Large plastics, chemicals and refining company 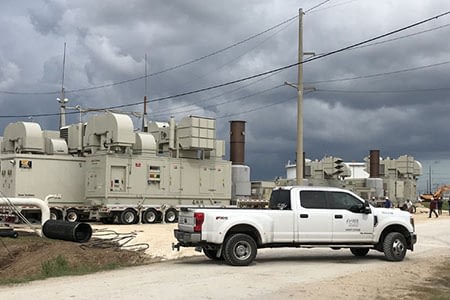 Our electrical technicians serve as first responders in major catastrophe areas such as hurricanes, storms, explosions, floods, tsunamis, and other emergencies, and are experienced repairing water-damaged electrical systems.

Flooded Equipment That Must Be Replaced

Flooded Equipment That May Be Reconditioned

We’ve assisted in emergency response for all types of companies and municipalities:

Here’s a video of the Houston Mayor thanking Saber Power for our efforts to quickly restore Houston City Hall after Hurricane Harvey flooding.

This website uses cookies to improve your experience while you navigate through the website. Out of these cookies, the cookies that are categorized as necessary are stored on your browser as they are essential for the working of basic functionalities of the website. We also use third-party cookies that help us analyze and understand how you use this website. These cookies will be stored in your browser only with your consent. You also have the option to opt-out of these cookies. But opting out of some of these cookies may have an effect on your browsing experience.
Necessary Always Enabled
Necessary cookies are absolutely essential for the website to function properly. This category only includes cookies that ensures basic functionalities and security features of the website. These cookies do not store any personal information.
Non-necessary
Any cookies that may not be particularly necessary for the website to function and is used specifically to collect user personal data via analytics, ads, other embedded contents are termed as non-necessary cookies. It is mandatory to procure user consent prior to running these cookies on your website.
SAVE & ACCEPT